Why I Scream For Animal Rights 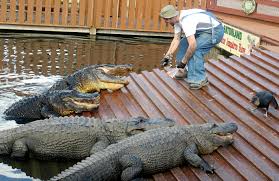 Why I Cry For the Rights of Animals
My Gatorland Experience

During my eight day vacation in Florida, most of the days were spent at Disney parks or by the pool. But on Saturday afternoon after taking a nap and rejoining with my family in the kitchen, I was told we were taking a trip to Gatorland. Gatorland is a tourist spot for anyone interested in alligators, crocodiles, or really any wildlife in the area. I thought it would be an exciting adventure.

As we pulled up to the main entrance it seemed like a cute place. They had a statue of an open alligator mouth in the front so many people would take pictures while pretending they were getting eaten. As we made our way to the ticket booth I could see that anyone with a military I.D got in for fifty percent off and anyone active duty got in for free. So my family whipped out our I.D’s and the amount we ended up paying was very small.

Walking into the park I saw a large pool area filled with at least a dozen alligators lying around and it was mesmerizing to see how these strange animals interact. As we made our way to the next area my heart dropped. At least 100 alligators ages two to four were crammed in such a small area. Some were stacked on top of one another. I tried to just forget it and enjoy my time. But as I went on it just got worse…all kinds of animals were in small cages and boxes. Even bobcats and goats! Huge albino alligators were kept in small glass cages. And large tortoises were kept in a small pen.

My mom had bought tickets for wrestling with the alligators so we made our way to the show. Right away the show started with a man grabbing an alligator by the tail and whipping it around and sitting on top of it while holding his jaw shut. The gator was squirming as if in pain and anytime she got the chance she would try to run. I couldn’t even look at this point because my eyes were beginning to fill with tears. After forcing the mouth of the gator open to show the audience her teeth he decided to show us how to put an alligator “to sleep” he flipped her on her back and pinned her down until she passed out. At this point, I decided it was a good time for me to leave because I felt so bad and could not take another minute of the show.

I didn’t want to look at any other animals, I feel bad for even owning a dog. I would hate to be stuck in a house all day and not be able to do anything. So this was torture for me to watch. The night was almost over but my family dragged me to one more show. It was the alligators night feeding. It was a competition between two men with a chicken tied to the end of their string and the only way the alligators could eat is if they could jump high enough to get the bait. This broke my heart.

After leaving the park I decided to post that I did not enjoy Gatorland and I believed they treated their animals badly and a boy told me I was clueless and alligators don’t have feelings. In my opinion, I don’t think the type of animals matter. I’m sure if it was a cute monkey in that small cage everyone would freak out, but because these creatures aren’t pretty people don’t care. I believe all animals small or big, cute or hairy deserve to live happy lives. Seeing this exhibit made me realize that all around animals are not being treated kindly.

I’m not sure where to start but maybe spreading the word and telling people not to support places such as this one because of its conditions. No matter what type of animal, whether it be human or an alligator should have a right to live free and in a natural environment.