Microsoft Announces The Xbox Adaptive Controller For Players With Disabilities 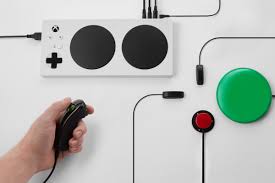 Microsoft has announced the Xbox Adaptive Controller, an Xbox controller designed for people with disabilities. It has two programmable buttons and 19 jacks that can be connected with joysticks, buttons, and switches. The Xbox Adaptive Controller is wireless and charged via a USB-C connection. It will make gaming easier for disabled players on Xbox One and Windows 10 PCs.

“I can customize how I interface with the Xbox Adaptive Controller to whatever I want,” says Solomon Romney, a Microsoft store learning specialist who was born without any fingers on his left hand. One can make the control fit the body however one wants. It takes virtually no time to set up and use; it could not be any simpler.

The focus of the adaptive controller is connectivity and customization, with players being able to setup and use it to their own capabilities. It won’t be an all-in-one solution for many games, but through the use of peripherals and the Xbox’s system-level button remapping, the possibilities could be endless. The Xbox Adaptive Controller will cost $99.99 and goes on sale later this year for all disabled gamers to enjoy. The current Xbox controller design and other controllers (like the Nintendo Switch and PlayStation 4) display a challenge to use as they were not designed for people with mobility disabilities. The Adaptive Controller is a foot-long rectangular unit with a d-pad, menu and home buttons, as well as the Xbox home icon button and two additional large black buttons that can be mapped to any kind of function.

The original inspiration for the Adaptive Controller came during 2015’s Microsoft One-Week Hackathon, an event where employees develop new ideas and tackle issues with their products to fix or change them. Microsoft partnered up with Warfighter Engaged, an all‐volunteer non-profit organization that modifies gaming controllers for severely wounded veterans through personally adapted devices. A prototype was created that would eventually become the Adaptive Controller.

Warfighter Engaged had been making custom adaptive items for combat veterans for a couple years before that. It was challenging because many of these basic changes requiring taking a controller apart. Warfighter Engaged founder Ken Jones said. “Microsoft was thinking along the same lines, it was really just perfect timing.”

As development on the project continued, Microsoft began working with other foundations aiming at making gaming accessible. These organizations include AbleGamers, SpecialEffect, the Cerebral Palsy Foundation and Craig Hospital, a Denver-area rehabilitation center for spinal cord and brain injuries. Microsoft has done a lot of work with these companies and foundations to make this revolutionary to disabled people who love video games.

Microsoft is doing an amazing thing for so many gamers that were affected in so many tragic ways and thought they would never play again. It’s great that the Xbox Adaptive controller is coming out for all disabled gamers to use and be able to play games again. It has everything one wants from comfort to the ability to customize. It is very easy for people with disabilities to set up and use. Microsoft has done a great job partnering up with Warfighter Engaged to make this possible. Video games are a part of many peoples’ lives and it’s a great thing that it’s still possible for these gamers to play games again and enjoy them.